Northern Lights – Drawing their curtains to reveal the sounds

The Northern Lights, fascinating and magnificent. A mystery, inspiring people’s beliefs and creating myths. A scientific challenge as well. The Norwegian scientist Kristian Birkeland developed a theory to answer the question why auroras appear when the magnetic field of our planet is disturbed. Even though his work lifted the veils of the aurora borealis, it took about half a century until the theory would be officially recognized. And now, five decades later, research is on the verge of success again, this time concerning the sounds of the aurora borealis.

An aurora, a breathtaking natural phenomenon, is all about excited atoms. Charged particles from the sun interact with the Earth’ magnetic field, unfolding a light show of rays, curtains and garlands, dancing the night away. The protective magnetic envelope is the weakest in polar regions, hence the northern (or southern) lights are visible to us at latitudes corresponding with these geographical positions. A cold night, a cloudless sky, a location away from city lights is all you may need for good aurora viewing.

Throughout time, the Northern Lights inspired scientists to climb hills and mountains, or the stairs to their observatories. What caused the aurora borealis to appear was explored bit by bit, the natural forces further explained.

A book by Petrus van Musschenbroek, published in 1736, can be read as the state of the art at the time. The Dutch scientist, professor in Duisburg, Utrecht and Leiden held positions in philosophy, mathematics, medicine and astronomy. Van Musschenbroek developed a strong interest in electrostatics and he discovered  electrical energy could be stored – the invention became known as the ‘Leyden jar’. It turned out ingenuity was in the air, as the same discovery was made a few months earlier. The German scientist Ewald von Kleist had successfully built a similar device.

Studying the skies, it’s important to distinguish between three categories, Van Musschenbroek observed– Waters, Winds and Lights. The Northern Lights and the Stars unmistakably are in the category ‘Lights’. That’s not very new, he admits. Aristotle, Plinius and Seneca already mentioned the occurrence of aurora. Science in the 18th century was thriving and also the phenomenon aurora borealis became more and more subject to elaborate scientific research. Sweden, France, Italy, The Netherlands were countries from where scientists reported to have witnessed “strange columns of coloured light shooting from the sky downwards”.

Lacking the knowledge we have nowadays, the Northern Lights were perceived as some kind of fire, like a burning cloud. However, these lights are within the atmosphere of our planet, Van Musschenbroek states explicitly. Not somewhere out there. Once the author discusses what he describes as “the substance of the northern lights” there is an interesting remark. He expects the aurora to consist of an inflammable substance and suggests it could be Phosphorus, the highly reactive chemical element, discovered in 1669 by the German scientist Hennig Brand. The theories kept him awake at night, wrapped up in his celestial reflections. One single time he had a very strange dream about the lights, something about energy…

The how, why and when of scientific discoveries is a story of chance, coincidence, trial and error, endless research for the new and serendipity. If Van Musschenbroek had followed the idea of electrical energy, watching the skies during a thunderstorm, hearing the lightning’s cracking sounds, maybe he’d came upon the facts. But perhaps, no, he wouldn’t. At that time people were not aware what caused lightning, that it’s all about energy. It was Benjamin Franklin who in 1752 discovered, with his kite-experiment: lightning is a stream of electrified air.

The aurora borealis has been the life’s work of a Norwegian scientist, Kristian Birkeland (1867-1917), at times referred to as ‘the first space scientist’. His work transformed contemporary understanding of the Northern Lights with his theory of atmospheric electric currents (named after him, the Birkeland currents). Advanced laboratory simulations of cosmic phenomena, using a terrella (a magnetized globe) and an electromagnetic cannon, enabled him to a deeper understanding of how electromagnetic forces might operate in the solar system. In 1899 he built the first permanent auroral observatory on the summit of Halde Mountain, located southwest of the Altafjord in northern Norway. Despite his poor health he organized and conducted several arctic expeditions.

Even though Birkeland’s work would be nominated seven times for a Nobel Prize, his research couldn’t amuse the mainstream astrophysicists. The theory was disputed as well as ridiculed and Birkeland died without being praised for what he’d achieved. In 1967 proof of Birkeland’s theory was found after a probe was sent in space. His findings were eventually confirmed. 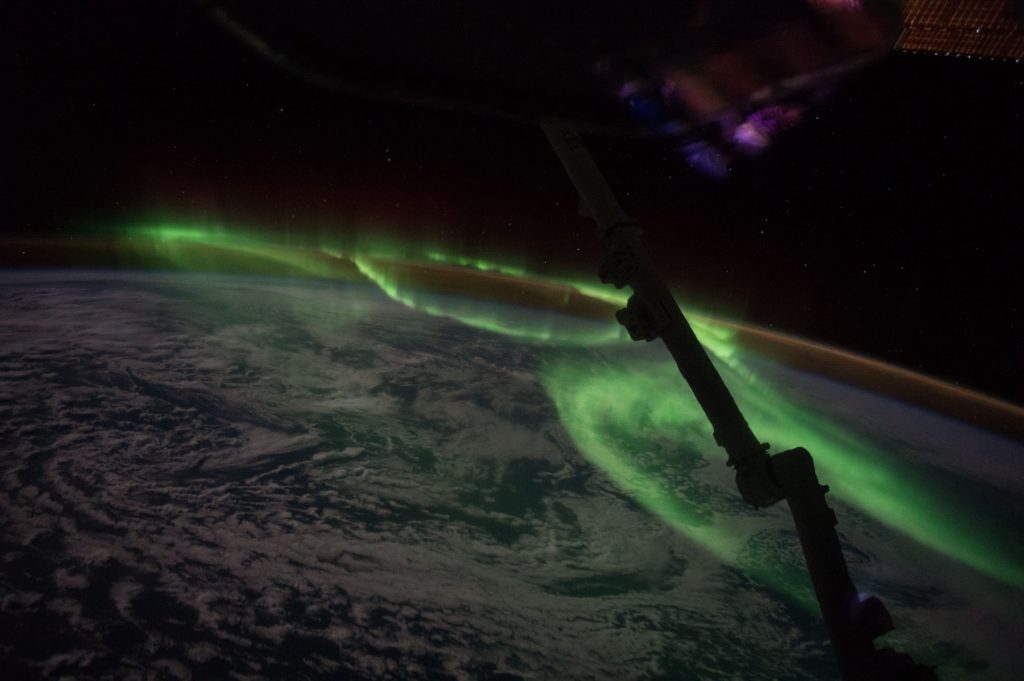 Aurora can be heard as well…

While the Northern Lights belong to the northern latitudes, auroras also can be seen at other places, although the typical green, blue and orange streaks of light will be absent most of times. While we marvel at the sight, one may wonder if there is any effect on animals. Presumably they  experience something physical by the changes occurring in the electromagnetic field in the air above. They’ll see the lights but could there be more?

Will animals hear the strange sounds the aurora produces? From observations of acoustic aurora we learn there is sound, i.e. energy and frequency. The geomagnetic disturbance that is caused by the energetic particles from the sun (the solar winds), is likely to be responsible for the clapping, cracking or banging sounds, Unto K. Laine and his fellow researchers from Aalto University in Finland discovered in 2012.

Of course, the effects of aurora on radiowaves had been witnessed long before. In 1859, it astounded two operators of a telegraph line. They could communicate with their power supplies switched off during a geomagnetic storm (the conversation between the operators of Boston and Portland, 2 September 1859, reported in The Boston Traveler). Because 1859 showed intense auroral activity, the phenomenon could for the first time be linked to electricity.

In 1972 the scientist R. A. Ham watched a spectacular aurora in Southern England, a rare occasion. He described the strange effect on terrestrial radio signals:

“For example, the familiar high-pitched tone of a cw (morse code) signal becomes a low-pitched rasp when it is reflected from an auroral display. The letter ‘C’ in morse code would normally sound like Dah dit dah dit, but under auroral conditions it would change to Ror rit ror rit.”

Our planet sings and swings

It reminds us of Pythagoras, the Greek mathematician and philosopher. His school held a belief in the importance of numbers as a guide to the interpretation of the world. Attaching strings, in various length of rope to wooden sticks, Pythagoras discovered numerical ratios corresponding to the principal intervals of the musical scale. At night, gazing at the stars, he developed the doctrine of the harmony of the spheres. This theory says each planet, while revolving in its own ring (sphere), produced a musical note. Named ‘Musica mundana’, music from the highest order. A heavenly chorus, determined by velocity. Pythagoras abridged: music is numbers, numbers is cosmos, cosmos is music.

“Birkeland understood for the first time why the Lights had defied neat explanation: they appeared not to belong to Earth but to space.” (Lucy Jago – The Northern Lights)

An electronic signal can be turned into sound. In other words, energy is translated to frequency. The electromagnetic spectrum (radiation) ranges from longest wavelength to shortest. Radiowaves have the lowest frequencies and longest wavelengths. The ionosphere is the electrical charged layer of the Earth’s upper atmosphere, from about 60 km to 1000 km altitude. It is ionized by solar and cosmic radiation – these lowest radiowaves reflect or refract from the ionosphere back toward Earth.

Extremely Low Frequency/Very Low Frequency (ELF/VLF) refers to the range 300 Hz to 30 Khz. Lightning is the most powerful source of ELF/VLF waves; the currents that make the northern lights belong to the same wave generation.

Now the question: is it true that one can hear auroras? Without any device (a VLF receiver) that is? It seems too good to be true. The spectrum of human hearing is 20 Hz to 20 kHz and given the fact that an aurora is never close to the ground but some 50 miles up, it must be imagination at work. Nevertheless the Northern Lights can be heard, the visual spectacle is accompanied by tweeks, crackles and other sounds, like a relic from the Flintstone era of analogue television. No broadcast meant ‘snow’ showing on the screen, spiced with those typical crackling sounds.

The 2012 research in Finland located – for the first time ever – where the aurora sounds were created. And it’s close to ground level, about 70 meters. Details about how the sounds are created were not available at that time. But now they are, after more cold nights in the open to capture the mystery. Laine developed a new inversion layer hypothesis:

According to the new inversion layer hypothesis, the popping and crackling sounds associated with the Northern Lights are born when the related geomagnetic storm activates the charges that have accumulated in the atmosphere’s inversion layer causing them to discharge.

Simplified: it suggests we might indeed hear the Northern Lights. Wildlife in the arctic and the boreal regions will too. Reindeer, for instance, have a frequency range of best sensitivity form 1Khz to 16 Khz (their hearing spectrum is 70 hz to 38 Khz). Thus the animals might detect the strange clicking, clapping or hissing sounds. 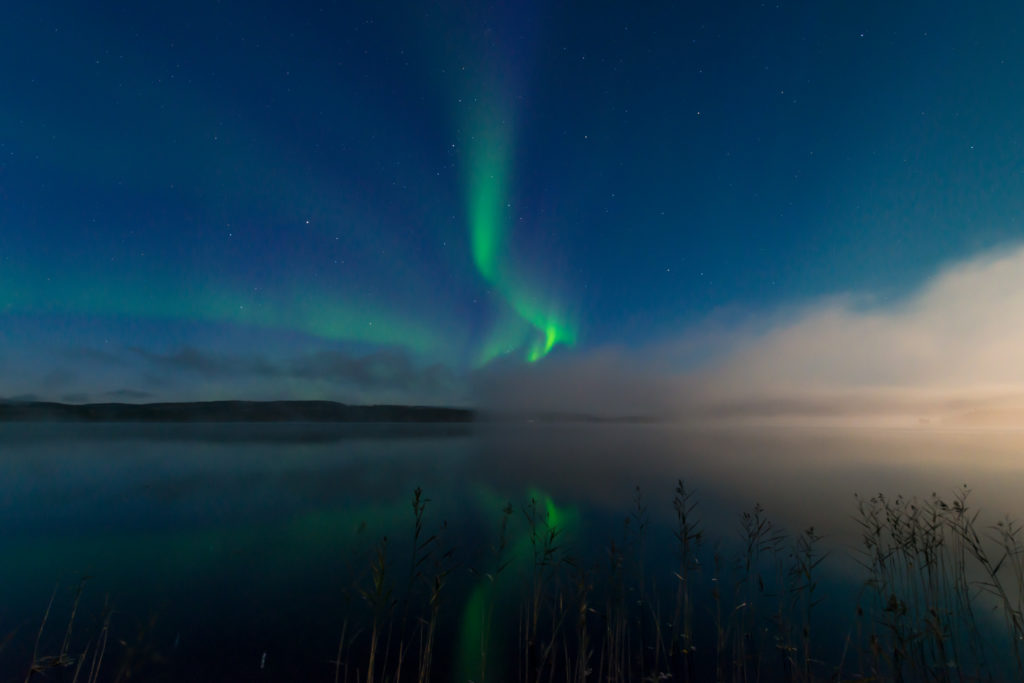 The Northern Lights aren’t dangerous. The garage door could swing open by itself, radio broadcasts could get disturbed, but they don’t cause actual harm. Your hair won’t fall out and there won’t be any warriors or their dead souls chasing after you. Apart from myths and legends, in which auroras are perceived as either good or evil, the attractiveness of the phenomenon has fringes to it belonging to another world. In fact, it has to do with what’s beyond, hence it triggers curiosity. But there’s more.

We are drawn to nature’s grandeur, attracted even to the most powerful exposures, gazing in a state of awe. A thunderstorm, an earthquake, hurricanes and floods – it’s nature pulling the strings. They are ferocious events, dangerous and often damaging. But, then again, let’s look on the pleasant side. Auroras are easy to like. They aren’t a hazard to us, as far as we know. Thus, have a bit of nature’s best – the extraordinary show of the dancing lights is capable of engaging the most busy mind, dense with worldly thoughts. It comes with the crackling sound, resembling down-to-earth bacon being fried.